Bletchley Park – war station for Britain’s codebreakers – is nearly 100 miles from where I live, so I don’t go there at the drop of a hat. However, I do go quite often, my first visit being over 20 years ago but, because of the distance, I try to combine calling in at Bletchley with some other mission. This often means that I have my Enigma machine with me because I’m en route for a speaking engagement. Do I leave the machine in my car while I call at the shop, visit an exhibition, or meet up with a contact? I do not! When I’m asked why I lug the machine with me, I respond with another question: where is the only place from which an Enigma machine has been stolen recently? Answer: Bletchley Park.

1 April 2000 was a Saturday, and Bletchley was open (it was only open two days per fortnight back in those days). That night, the national news programmes reported that a ‘unique code machine had been stolen from Bletchley Park’. I found this both worrying and puzzling, because I didn’t think that the Bletchley Park Trust owned a unique Enigma machine. The basic facts soon surfaced: what had been stolen, from a display case in the mansion during opening hours, was an Abwehr Enigma, a rare type with no plugboard, and with four rotors. A much quoted value was £110,000, which I felt to be something of an overestimate at that time. Was the Trust embarrassed? – you bet, because this machine wasn’t theirs, it belonged to GCHQ.

The machine, serial number G312, made the front cover of the very next issue of Invaluable, a trade periodical devoted to exploring security measures designed to protect art collections, and to tracking down stolen objects when security has failed. BT, then still co-owner of the site offered a £5,000 reward for information leading to its recovery. The grounds around the mansion were searched, the lake was dragged, but to no avail. Machine and thief had vanished. Speculation was rife; many declared it was an ‘inside job’, arising out of rivalries between board members of the Bletchley Park Trust, others argued that it must have been stolen to order for a wealthy client. 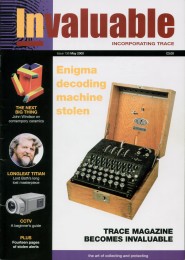 It was more than five months later that the Trust received a strange letter, from someone purporting to be in possession of the machine, but wishing it to be returned to its rightful owners. The catch? The writer claimed that an (unidentified) person had bought the machine for £10,000, and would like to be re-imbursed for what he had innocently paid out. Words like ‘ransom’ and ‘blackmail’ would come into most people’s minds at this point.

The Trust and the police worked closely on the case. The ransom wasn’t paid, but the blackmailer wasn’t traced. He grew more demanding, leaving threatening voice mails for the CEO of Bletchley Park, and raising his price to £25,000. This the Trust finally agreed to pay – but before any payment was made, the blackmailer posted the machine to Jeremy Paxman, who was the presenter of the BBC 2 programme ‘Newsnight’. The machine itself was unharmed, but three of its four rotors had been removed. The blackmailer threatened to destroy these if the ransom were not paid in full.

By this time communications with the blackmailer had broadened to include messages published in the personal columns of The Times, and a Times journalist, Nick Fielding, became a go-between, relaying messages of various sorts to police and blackmailer. Finally, in October, an antique dealer, Dennis Yates, was arrested in a telephone box making an incriminating call to Fielding. The rotors were recovered later, undamaged.

Yates was charged with handling stolen goods, and blackmail. His case came to court in September 2001, and he pleaded guilty so readily to the first charge that the second was not proceeded with. He was subsequently sentenced to ten months’ imprisonment, but released within three months. The thief has never been identified, but security at Bletchley Park has been stepped up. 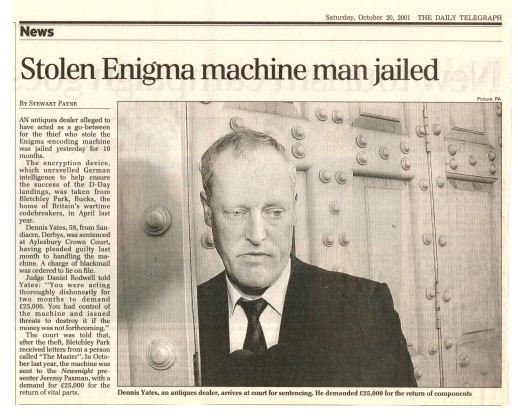 On a number of occasions, I have had a trade stand at the National Vintage Communication Fair, and was intrigued to find that Yates was often there as well. We passed the time of day, but I never felt able to raise with him the subject of G312. However, the last time I saw him at one of these fairs, on his stand he had – an Enigma machine! 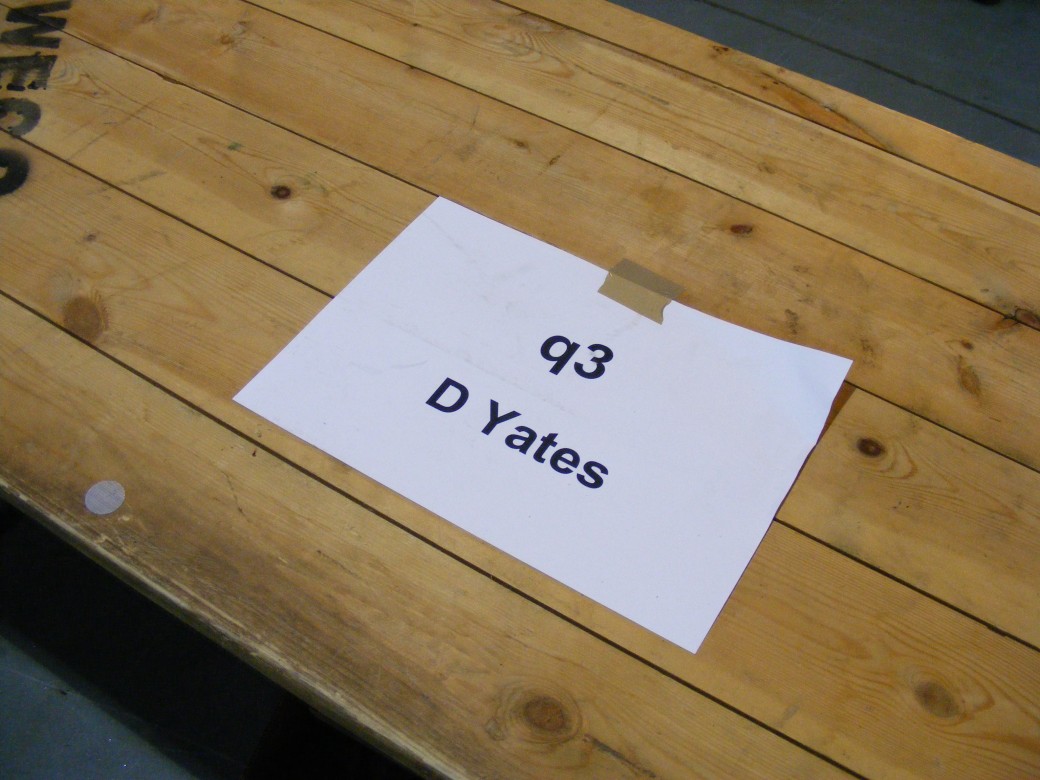 What a story – theft, blackmail, coded messages, anonymous letters and parcels, and a mysterious buyer – but the complete story has never been told, and now may well be lost for ever, as a Vintage Radio website recently reported that Yates had been found dead in his car earlier this year.